35 On the evening of that day, he said to them, “Let us cross over to the other side of the lake.”

36-38 So they sent the crowd home and took him with them in the little boat in which he had been sitting, accompanied by other small craft. Then came a violent squall of wind which drove the waves aboard the boat until it was almost swamped. Jesus was in the stern asleep on the cushion. They awoke him with the words, “Master, don’t you care that we’re drowning?”

39 And he woke up, rebuked the wind, and said to the waves, “Hush now! Be still!” The wind dropped and everything was very still.

40 “Why are you so frightened? What has happened to your faith?! he asked them.

41 But sheer awe swept over them and they kept saying to each other, “Who ever can he be?—even the wind and the waves do what he tells them!” 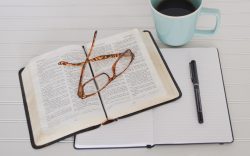 Books of the Bible