Thus the heavens and the earth were completed in all their vast array. 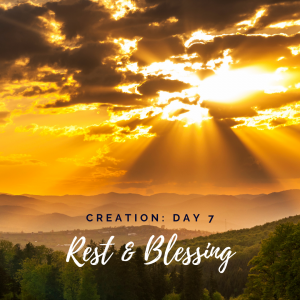 We all have jobs. We could be working for a big named company or just a Micky D’s around the corner. Then you have jobs after your job like: going to the store, picking kids up from school, or just going to the gym. While you are doing all of this back and forth, you suddenly pass out and the next thing you know, you’re in the hospital.

Can you think of any reason as to why you are here? A million things could be going through your head but the one thing you actually need… it’s the simplest thing. Rest. You could be doing a million things and thinking of a bunch of different ways to do it, but rest needs to be a part of that schedule. I’m not talking about the few hours you take till the next day to start up again.  I’m talking about taking one day to stop your body and mind; and enjoy everything that you have earned, made, and created because even God took one day to rest.

Let me take you to the book of Genesis:

“[t]hus the heavens and earth were completed in all their vast array.”
Genesis 2:1 NIV

The world is made, everything is coming together, and God has given light to the darkness and to a formless and shapeless world. Water and land now cover the world. In my opinion, this is the time when God was putting the finishing tweaks on his vision of the world: probably expanding a sea, putting more trees here and there, fussing over little things, or even thinking of throwing it all away and starting over. While he is fussing and looking over his world, I can see one of the angels coming and whispering to him saying, “Uhm hm. Now that looks like a mighty fine world you done there. Your best works of art. But, Lord, you looking a bit tired there.” What I think happened next was God took a good look at his creation and said, “Yeah, it is good.” And as the seventh day came around,

“God finished the work he had been doing; so on the seventh day he rested from his work.”
Genesis 2:2 NIV

As the seventh day came around I believe in my sanctified imagination that God found his holy lazy boy chair, sat back, and just looked at the world that he created. He watched and admired the detail and the work he put into making Earth:  how the trees moved to his holy breath and how the animal lived. I’m sure one of his angels even popped his chair back and put a glass of lemonade in his hand. Rest became a good thing, so good God had to bless that day,

“[t]hen God blessed the seventh day and made it holy, because on it he rested from all work of creating that he had done.”

Rest. 6 out of 7 days God worked and worked: from the creation of his sun and moon, to make night and day, to putting the last creature in existence. But, the one day, the seventh day, he chose to rest from all work of creating. If God can find one day to rest and relax out of the humdrum of creating an entire world, so can we. When you do find that rest, you should know that that day will be a blessing to you.