God told the serpent:
“Because you’ve done this, you’re cursed,
cursed beyond all cattle and wild animals,
Cursed to slink on your belly
and eat dirt all your life.
I’m declaring war between you and the Woman,
between your offspring and hers.
He’ll wound your head,
you’ll wound his heel.”

He told the Woman:
“I’ll multiply your pains in childbirth;
you’ll give birth to your babies in pain.
You’ll want to please your husband,
but he’ll lord it over you.”

He told the Man:
“Because you listened to your wife
and ate from the tree
That I commanded you not to eat from,
‘Don’t eat from this tree,’
The very ground is cursed because of you;
getting food from the ground
Will be as painful as having babies is for your wife;
you’ll be working in pain all your life long.
The ground will sprout thorns and weeds,
you’ll get your food the hard way,
Planting and tilling and harvesting,
sweating in the fields from dawn to dusk,
Until you return to that ground yourself, dead and buried;
you started out as dirt, you’ll end up dirt.” 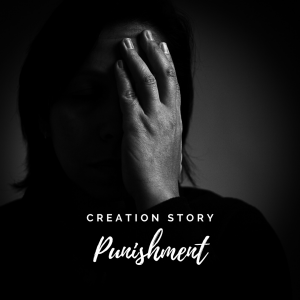 So, BOOM! God finally got Adam and Eve to admit that they ate the fruit of the tree of the knowledge of good and evil and God was “teed off the highest level of tee-tivity.” So He, as most parents do, started handing out consequences.

He not only punished humans but the animal who played a part in the fall as well. Whew! The snake too, Lord?

I imagine that God’s conversation with the snake went like this,

“Really snake? You got them to do the one thing that I asked them not to do. Okay, bet. You are now the lowest on the totem pole. As a matter of fact, gimme those legs, and go ahead and eat that dirt while you’re down there. The next time you see a human, you better be ready to knuck because, as sure as I am God, they are going to buck.”

“Cramps ain’t got nothing on these childbirth pains that you’re about to have, so brace yourself. Don’t even worry about apologizing to Adam because he’s blaming you for this for a long time.”

And, finally, to Adam,

“Bro’ I told you explicitly NOT to eat this fruit! That message was not sent through any other being. I gave the game plan directly to you, but instead of listening to Me, you allowed another ‘man to convince you otherwise. So, go grab your garden tools because there will be no more free lunch. You have to work for whatever you plan to eat because all this good food does not just pop up out of the ground. I pulled you out of that ground and I’ll put you right back!”

Trust in the Lord with all your heart and lean not on your own understanding; in all your ways submit to him, and he will make your paths straight.

Neither Adam nor Eve listened to God. They leaned into their own understandings of the rules of God for Eden. They didn’t allow Him to keep their paths straight. So, as a consequence, God put some twists and turns into their lives.

Eve didn’t get the heavenly anesthesia that Adam got when she was formed from his rib. She was allowed to bear the pain of childbirth. Adam was no longer allowed the luxury of waking up to ripe fruit and vegetables every morning. Now, he had to wake up, work the ground, figure out what plants were in season, and hope that the weeds don’t overtake his crops. Now when they take walks through the garden, they’d have to worry about whether or not a snake is slithering around…

Think about some of the situations in your life where you’re hitting unexpected twists and turns. Reflect on how your understanding is keeping God from making your path straight.