Two days later Jesus’ mother was a guest at a wedding in the village of Cana in Galilee, and Jesus and his disciples were invited too. The wine supply ran out during the festivities, and Jesus’ mother came to him with the problem.

But his mother told the servants, “Do whatever he tells you to.”

Six stone waterpots were standing there; they were used for Jewish ceremonial purposes and held perhaps twenty to thirty gallons each. Then Jesus told the servants to fill them to the brim with water. When this was done he said, “Dip some out and take it to the master of ceremonies.”

When the master of ceremonies tasted the water that was now wine, not knowing where it had come from (though, of course, the servants did), he called the bridegroom over.

“This is wonderful stuff!” he said. “You’re different from most. Usually a host uses the best wine first, and afterwards, when everyone is full and doesn’t care, then he brings out the less expensive brands. But you have kept the best for the last!”

This miracle at Cana in Galilee was Jesus’ first public demonstration of his heaven-sent power. And his disciples believed that he really was the Messiah.
John 2:1-11 (TLB) 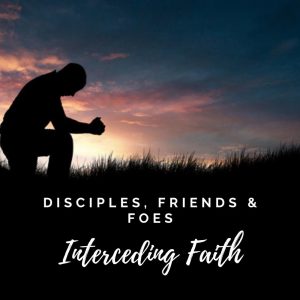 Growing up I saw life through a set of eyes where my only concern was my well-being. It wasn’t until I became a parent that my perspective changed. Seeing the needs of my children before the request is now my normal view.

This is illustrated in the story of Jesus’ first miracle where he turned water into wine.  Here, Jesus’ mother Mary noticed there was a problem. Instead of her being hesitant or bringing attention to the situation, she sought out someone that she knew could and would fix the problem. First, you notice her faith, then her response.

She went to her son Jesus. She didn’t come to him with a command, but rather an honest request for help for someone else. When she made this request Jesus’ response was “it’s not yet my time,” but seeing the faith of his mother interceding on behalf of someone else, changed Jesus’ mind (John 2:4 TLB). So, he honored the request that was made.

As believers, we too see life with a different set of eyes. We have the ability to see the needs of others even when a request is not made. We notice someone’s lack of faith, their irritation with life, and their cry out for help whatever the situation may be.

In this life we are faced with many challenges that may tempt us to give up. Nevertheless, we have to remember God’s track record. When we intercede on the behalf of others, it not only impacts their life but it also increases our faith in God.