In the Garden of Eden

Now the Lord God had planted a garden in the east, in Eden; and there he put the man he had formed. The Lord God made all kinds of trees grow out of the ground—trees that were pleasing to the eye and good for food. In the middle of the garden were the tree of life and the tree of the knowledge of good and evil.

The Lord God took the man and put him in the Garden of Eden to work it and take care of it. Genesis 2:8-9;15 NIV

The Word of God doesn’t really inform us about the world outside the “Garden of Eden.” A garden typically has a boundary, in current times this might be a fence, separating what is inside from that which is outside. The whole of the created order, the entire world, wasn’t part of the garden. Only a section that was set apart. While we don’t know the exact size of the garden, v. 15 gives us some insight.

The Lord God took the man and put him in the Garden of Eden to work it and take care of it.. Gen. 2:15

The action word “to take care of” indicates that there is the possibility of debasement and decay, and that something or someone may endanger 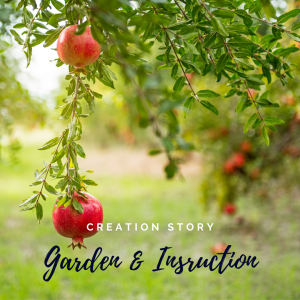 the peacefulness of the garden. If God intended for Adam, and eventually Eve, to take care of, the size must have been manageable for a couple. He gave Adam the gift of provision, “trees that were pleasing to the eye and good for food” v.9, and an assignment to maintain that which he had been given. He would be constantly interacting with God’s creation, both receiving sustenance from and providing care for.

My final take away is this: Encounters ground us in relationship. God wants to be involved in our lives and for us to engage with Him and his creation as well. God wants us to be known. God didn’t put Adam and Eve in the Garden to only check on them once a month to see if they were still alive. The bible says in the book Genesis that He walked with them each day in the garden. They were in a relationship with Him. He initiated the connection because He valued the relationship, and maintenance for the relationship was a shared responsibility, just like the garden. This is true for you as well. God wants to encounter you to build a relationship with you, but you have to be willing to participate.