Created For His Purpose

And there it was:

wild animals of every kind,

Cattle of all kinds, every sort of reptile and bug.

God saw that it was good.

God spoke: “Let us make human beings in our image, make them

So they can be responsible for the fish in the sea,

the birds in the air, the cattle,

And, yes, Earth itself,

and every animal that moves on the face of Earth.”

he created them godlike,

He created them male and female.

Be responsible for fish in the sea and birds in the air,

for every living thing that moves on the face of Earth.”

Then God said, “I’ve given you

every sort of seed-bearing plant on Earth

And every kind of fruit-bearing tree,

given them to you for food.

To all animals and all birds,

everything that moves and breathes,

I give whatever grows out of the ground for food.”

And there it was.

God looked over everything he had made;

it was so good, so very good!

It was evening, it was morning—

The first chapter of Genesis sets the tone for life on earth by the hand of God. In seven days, God created a marvelous planet out of nothing. While reading about the creation of the world, it’s very evident that when God speaks creation was obedient to the command that was given. In verse 24, God 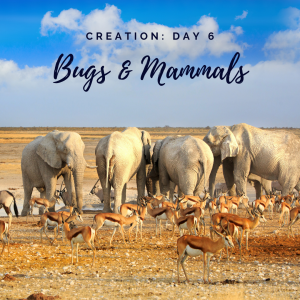 spoke for earth to generate life, earth did not talk back or waste time following the command that was given. Earth knew to obey the command of the father, its creator. Genesis 1:24-25

This highlights that obedience was established before the foundation of the world. God created every type of reptile ,bug, cattle that you could think of. Creation was established for God’s plan and nothing was created by accident. God has a purpose for even the smallest of creatures that walk, crawl, or fly on earth. Bugs alone serve a purpose in this life, yes even the hideous of bugs and insects that we decide to run away from ( this means roaches have a purpose too).

This illustration can be seen in the all time favorite Disney movie ” The Lion King”. Simba forgets who he resembled or who lived in him until meeting with Rafiki, who takes Simba to a pond of water where he looks into the water to see his reflection. Simba turns away too quickly. Rafiki tells Simba to “Look harder”. Simba’s reflection soon changes into his father’s. Rafiki says to Simba, ” You see, he lives in you”.

Because we are the resemblance of our father, he allowed man to rule over the earth as a whole. Not to beat down creation, but to be the structure that keeps things in the order God intended.

God not only created male, but he also created female so man would not walk this earth alone. No, He did not create a girlfriend or a bed mate. Creation of a wife for man, male and female. God established the sexes because with male and female reproduction occurs, this is how God intended it to be. According to Webster’s Dictionary, reproduce means to make a copy, representation, duplicate, or close imitation of. God wanted earth to be full of his people, so He blessed them to reproduce and fill the earth. Genesis 1:28

God is such a provider that he ensured humans and animals had the proper nutrition for survival. There was no need for any grocery stores, groceries were at their disposal. Provision was not just for man, but every living thing that moved on the face of the earth. Because God is the creation, he fulfills our every need. When God finished creation, he was pleased & marveled at all that was done. Not that he doubted his work but because of his infinite  wisdom, he saw greatness come forth through his creation. Notice that every time God finished he stated ” it was good”, and that tells me that nothing was a mistake.

Final Takeaway: Because God has entrusted you (his creation) with his blessing, remember that you have the authority to be bold. You are a resemblance of your father. Remember that you are a part of his plan, ask him for guidance in your everyday existence. Ask God, our father/creator, what his plan is for your life daily.