As he passed inside, the young servant girl guarding the gate took a look at Peter and said to him, “Aren’t you one of his disciples?”

Meanwhile, Peter was still standing in the courtyard by the fire. And one of the guards standing there said to him, “Aren’t you one of his disciples? I know you are!” Peter swore and said, “I am not his disciple!” But one of the servants of the high priest, a relative to the man whose ear Peter had cut off, looked at him and said, “Wait! Didn’t I see you out there in the garden with Jesus?” Then Peter denied it the third time and said, “No!”—and at that very same moment, a rooster crowed nearby. 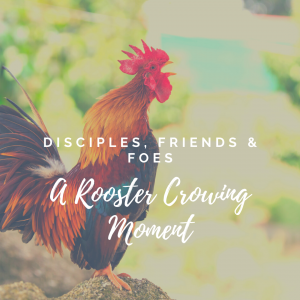 I teach little people. You don’t know how many times in a given day these little people run up to me, grab my leg, and say, “I love you.” They tell me they wish I could teach them forever. They have very close ties with other little friends so much so that they call each other best friends. I could infer that we are a tight-knit little community of learners.

Yet, there is a snag, or shall I say fallacy, in my description, and it is totally due to four letters–FEAR! Let me get a whiff of trouble brewing in the air. Their fear of the unknown causes all kinds of mayhem. They turn on each other like praying mantises. In fact, they become enemies fueled with threats (“You are not my best friend anymore; I’m not inviting you to my birthday party”).

It can get a bit ruthless at times and tears rush down their faces like a waterfall. These little people will even L-I-E if it means they don’t have to deal with a consequence, and they will throw everyone near and dear under the bus with them. At such young ages, they have pinned what I like to call the “Peter Complex” perfectly. Their fears of both known and unknown consequences resulted in cowardly decisions.

Although my initial example deals with children, adults respond similarly. Have you ever been so afraid of a consequence or negative response that you allowed your fears to make you say or do something you later regretted? We can all be so bold and steadfast when things are going in our favor; we stand tall and profess all sorts of guarantees and affirmations. And, in all honesty, at the time we are making those proclamations, we believe them wholeheartedly.

Peter believed that in the midst of trouble he would defend and even die for Jesus. He acted rashly when Jesus was first taken captive by cutting off the ear of the high priest’s servant. Still, Jesus performed His final miracle by restoring that which was cut off. When we fall short, respond rashly, react impatiently–Jesus is still with us, cradling us in His care in the midst of our mess. He loves us so much that He extends His grace to us just as he did with Peter and the servant of the high priest.

Peter’s grandstanding attempt to show his love for Jesus was a failed attempt, but he didn’t stop there. Peter’s fears for his own trepidation led to his denial of Jesus three times. Jesus knew he would do it, but Peter wasn’t convinced just yet. Jesus knew that Peter would be overcome with fear. He knew that Peter did not have the courage to see all that he witnessed that day and still acknowledge that he was a follower of Jesus Christ. Jesus knows you and I as well–every good and shady quality. He knows what will rattle us and what will set us free.

The crowing of the rooster was Peter’s reality check and the start of mending Peter’s brokenness. We all have that rooster crowing moment in our lives that draws us nearer to Him. Jesus patiently waits on us to make a courageous decision to choose Him. Each of us has this opportunity to: seek Him, call on Him, commune with Him, and trust in Him. It is not too late to allow His Love to engulf us completely. Surrender to all of His ways, His will, and His Word.

Peter’s repentance allowed him to be a great leader and preacher of forgiveness because he experienced it firsthand after Christ’s Resurrection. (Peter never failed to follow Jesus although he stumbled. JESUS chooses people who will be changed by His Love. Peter became that man. WE MAY WONDER WHAT JESUS SAW IN PETER, WHAT HE SEES IN US…IN SPITE OF OUR FAILURES, WE CAN GO ON TO DO GREAT THINGS FOR GOD AS PETER DID.)

Reflection Question: God uses failures for His Glory everyday. What failures have you
experienced that have allowed you to be a witness of God’s Glory and a recipient of his
forgiveness?

Prayer: Lord, I thank you for knowing me so well and for loving me completely. Thank you for
carrying my mess and for revealing to me my brokenness. Forgive me for taking matters into my
own hands. I surrender to You and I trust you. Have your way in my life as my intention aligns
with Your Will. Allow my story to be used for Your Glory, in Jesus name, Amen.